Earn G’s for your Business with GamerGreen

Home/Entertainment Vending Industry, Industry/Earn G’s for your Business with GamerGreen

Earn G’s for your Business with GamerGreen 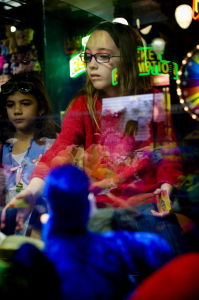 It starts with an existing claw machine or bulk machine. Next, comes a special GamerGreen code. This code is printed and applied to existing prizes inside your machine. When a player wins a prize, the tag on their prize (or insert included in bulk prizes) directs them to gamergreen.com, where players are asked to create an account.

When an account is created, the player inputs the code they found on their prize. Each code allots an amount of redemption numbers, or “G’s”. A user can bank G’s in their account to save up for larger prizes, or, they can spend what they have right away. These prizes range in value from Bluetooth Speakers to Xbox consoles to trips to Vegas.

What’s in it for you?

With GamerGreen in your machine, you are offering a double prize, the prize they win on location and the prize they can redeem online. Now your player is connected online to other players via gamergreen.com and GamerGreen’s social media. Online players can share tips and tricks on how to win prizes, what they’ve won, what GamerGreen prizes they’re saving up for and where to find other GamerGreen machines.

Adding GamerGreen to your machines fosters loyalty to your specific machines, increasing your profits. Not only will your machines have an update that gets with the times, they will attract more affluent players who are more likely to return again and again.

It’s easy to get started, simply contact us. Whether you want to learn more or if you’re interested in partnering with GamerGreen and giving your machines the upgrade they need.