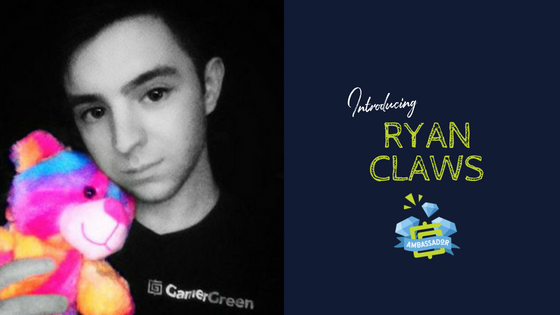 Ryan joined the GamerGreen Ambassador Program in 2017, and represents the state of Michigan on GamerGreen.com. We’ve had the pleasure of getting to know Ryan through the Ambassador Private Facebook Group and he is an incredible asset to the team! Ryan is always winning the latest plush out of machines and supporting GamerGreen through social media.

Here’s what Ryan had to say about GamerGreen:

Hey, GamerGreen-ers! I’m Ryan, and this is the second year I’ve had the privilege of being an official GamerGreen (GG) ambassador. I love being an ambassador; it means a lot to me to be a part of such an amazing, kind-hearted, loving group of people. I also enjoy the concept of GG: win codes from the claw machines, save up G-tickets, redeem for prizes!

I’m currently saving up for a ‘Rainbow Flag Patch‘ for my backpack… I’m almost there, just over 1,000 G-tickets away!

I also want to thank everyone in the ‘GamerGreen fam’ for allowing me to partake in another year of ambassadorship. It’s such an honor & I plan on applying next year!

Happy pride month everyone, & good luck out there, not only at the claws, but good luck in life in general.