Thanks for telling our claw machine secret, Jeff Rossen!

Thanks for telling our claw machine secret, Jeff Rossen! 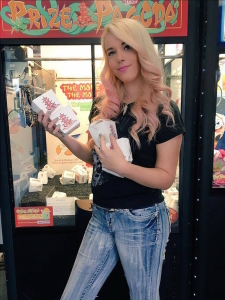 We at GamerGreen would like to an extend a great big “Thank You” to Jeff Rossen for letting the “claw machine secret” out of the bag on TODAY this morning. During a four minute segment on Wednesday, July 13th, Jeff took the time on TODAY to answer the question, “Is the claw machine rigged?”

After bringing in ClawStruck, an expert claw player and GamerGreen Member, Jeff very quickly learned that the claw machine is designed with advanced controls that manipulate the claw to make the game harder or easier. You got us Jeff! Claw machines are controlled by human operators and now that you have opened up the conversation, we can set the record straight.

If basketball was easy, would Tim Duncan have retired as only the third player to win 1,000 career regular-season games?  Would the NBA even exist if everybody was as good as Michael Jordan?

The control of the claw mechanism allows the owner to make the machine fun for differing levels of players. Some machines may get harder over time because the owner wants to help players increase their skill levels.

The claw machine is a fun form of entertainment that people of all ages enjoy. The goal of owners and operators everywhere is to make sure that it keeps being fun for everyone by varying the levels of difficulty for each machine.

At GamerGreen, we want to make sure that you not only have fun at the claw machine, but that you get more bang for your buck when you do win. And you will! Keep practicing and honing your skill. And Jeff, next time we see you at the claw machine, you had better be ready for a challenge to see who has the best skill!

(Big shout out to ClawStruck for schooling Jeff on how our industry’s machines actually work!)